A range of technologies exist to generate electricity on the basis of solar energy. The predominant one used today is photovoltaic (PV) technology. All current Origis Energy projects use solar PV technology.

What is solar energy?

The term photovoltaic is a combination of two words: “photo,” meaning light, and “voltaic,” meaning electricity. Photovoltaic technology is the term used to describe the hardware that converts solar energy into usable power, which generates electricity from light.

At the heart of PV technology is a semi-conductor material which can be adapted to release electrons, the negatively charged particles that form the basis of electricity. The main semi-conductor material used in photovoltaic cells is silicon, an element most commonly found in sand. There is no limitation to its availability as a raw material as silicon is the second most abundant material in the earth’s mass.

A photovoltaic system therefore does not need bright sunlight in order to operate. It can also generate electricity on cloudy days. Due to the reflection of sunlight, slightly clouded days can even result in higher energy yields than days with a completely cloudless sky.

How does a grid connected photovoltaic system work? 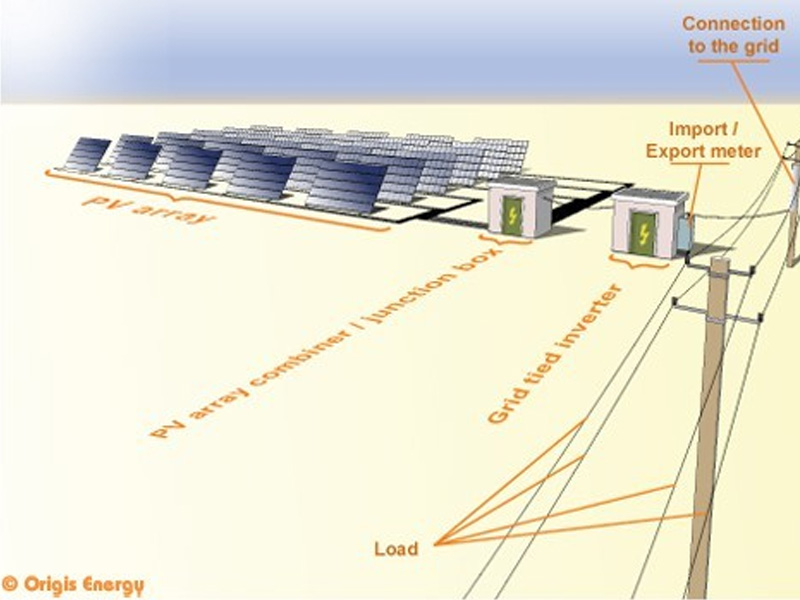 How does a PV system work?

The basis of a photovoltaic system is a set of panel(s). Different panels are linked in a series called a “string.” The current created by the string or a combination of strings is routed to an inverter. An inverter inverts direct current (DC) into alternating current (AC). The AC current is metered and up-scaled to the voltage required for direct use on the premises or to be fed into the public grid.

The main characteristics of a PV system

The electricity produced by a photovoltaic system is dependent on its size, location and the quality of materials and installation. The output of a photovoltaic system in the short run depends on the weather conditions with direct sunlight being the main driver but temperature also has an impact (the hotter, the lower the production). Hence, predictability in the short run (daily basis) is low, except in regions with a very stable climate and predictable weather conditions. In the longer run, e.g. on a yearly basis, the output of a photovoltaic system is much more predictable. The variation in sunlight on a yearly basis is limited to about 5%.

A photovoltaic system requires low maintenance: periodic checkup and cleaning and incident intervention. Over time, the system is likely to be subject to a slight degradation of its performance. The panels usually come with a performance guarantee of 80% over 25 years. As a result of the above, the long term electricity produced by a photovoltaic system is highly predictable.

A photovoltaic system is not harmful to its environment since it doesn’t create noise, smell or pollution in any way.

How does a PV project make a positive contribution to the environment?

The production of electricity on the basis of PV-technology does not create any CO2-emissions. As the PV industry is a new industry with recently installed and efficient manufacturing processes, the CO2 created during the production is limited.

The electricity produced by the PV project replaces electricity otherwise produced by nuclear or gas or coal fired plants. Depending on the location of the project a PV system will reduce annual CO2 emissions between 600 tons and 1,400 tons per MWp installed, or the equivalent of 450 cars (driving an average annually of 15,000 km or some 9,000 miles).

Attractiveness of a PV project as a financial investment

Spurred by the threat of global warming and in order to reduce their dependence on nuclear power or fossil fuels, different countries have put in place incentive mechanisms to support the investment in PV projects. These incentives vary from country to country but most EU countries provide for a guaranteed price and off-take for the electricity produced by a PV system for a certain period of time, mostly 20 years. In the US, the incentives are more tax driven and require utilities to have a minimum volume of renewable energy in their production mix. The combination of such incentive programs with the operational characteristics of a PV system provide an excellent investment opportunity. Once the project is operational and enjoys the guaranteed off-take at the agreed price, the cash flow characteristics and hence the risk-reward relationship falls somewhere in between that of an investment in high quality real estate and an investment grade bond.

There are many ways solar energy generation contributes to a healthy environment.

Some features on this website use cookies, which are only stored on your device and used with your consent according to applicable law. This tool will enable you to choose to accept or refuse certain types of cookies we use on this website. You can modify your choices at any time in settings.

Some features on this website use cookies, which are only stored on your device and used with your consent according to applicable law. The tool below will enable you to choose to accept or refuse certain types of cookies we use on this website.

You can modify your choices at any time by navigating the tabs on the left hand side.

Strictly Necessary Cookie should be enabled at all times so that we can save your preferences for cookie settings.

If you disable this cookie, we will not be able to save your preferences. This means that every time you visit this website you will need to enable or disable cookies again.

Please enable Strictly Necessary Cookies first so that we can save your preferences!